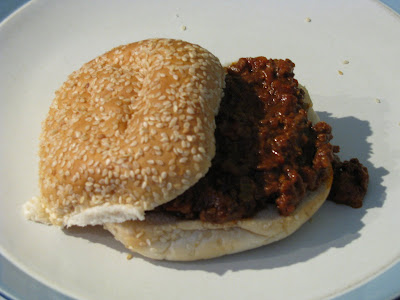 On Monday night, I came home from work with some energy. Given that I am currently 38 weeks pregnant, this is a rather rare thing lately. So, I sat down with Not Your Mother's Slow Cooker, and tried to find a recipe to make.

See, the night before, we had been gifted with a new slow cooker. We didn't need to be gifted with it--Sara, are you reading this? It appears that our old one had an accident when we left it at Kurt's college reunion, and this was a replacement. Nevertheless, since we had it (however much it was unnecessary to replace it!), I figured we would take it for a spin.

I chose a recipe that was completely out of character for our household--Sloppy Joes. I don't think we have any fundamental issues with Sloppy Joes. It's just one of those recipes that we've never thought of making before. For some reason, on Monday night, they sounded good. So, when Kurt got home from work, we decided on a simple dinner, and went shopping for ingredients for both dinner and the Sloppy Joes, which would cook overnight in the slow cooker and serve as lunches for the next few days.

A few notes. Our slow cooker is six quarts. This recipe is built for a "medium" cooker, which, in this book, means 3-to-4 quarts. So, we doubled the recipe to make sure that it would fill the bowl enough not to burn. This turned out to be a very wise choice, as it was still only filled about halfway. It cooked well, though, so I'm thinking the empty half of the crock did no harm. My other note is that, when we make this recipe again, we will use ground turkey instead of ground beef. It's just personal preference. But, in recent years, even the leanest ground beef still tastes greasy to me. I love my ground turkey, so I'll definitely make that substitution next time.

The overall reaction was that this is a very good recipe. I love that it doesn't use heavily processed foods. Actually, that is something that I love about the whole book. Most recipes I find for slow cookers are laden with cans of "cream of this soup," and "cream of that," canned vegetables, and other processed foods that I can't see myself using if I were cooking stove-top. This book, in general, avoids that downfall, and this recipe is no exception. I highly recommend the book to health-conscious, but time-pressed people who would like to use their slow cookers to make REAL food.

Here is a link I found to the recipe. Enjoy!
Posted by Allison at 11:41 AM 2 comments: Links to this post

You Win Some, You Lose Some 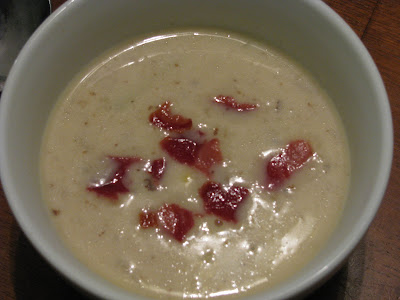 Kurt often says, "Sometimes you eat the bear. Sometimes the bear eats you." I'm assuming it's a movie quote of some sort, and I just don't have the cultural literacy to know where it comes from. That happens more than one might guess. In any case, Wednesday night was the perfect time to use that quote. Seems that we got eaten by the bear, and then got to eat some very good corn chowder afterwards. Hmmm, that's a bit "Jonah and the Whale-ish," isn't it?

In any case, Wednesday night started off very promising. During work, I had been smelling the corn chowder that was available in the cafeteria. Now, I've learned my lesson--actually, learned it a few too many times--about eating food at my company's cafeteria. Namely, don't do it. And, if you do it, knowing full well that you shouldn't, do not, under any circumstances, get the soup. The soups there must be loaded with MSG because the kinds of headaches I get immediately after consuming it are excruciating.

Anyway, I really wanted corn chowder after smelling it all day, so I searched around for a recipe. See, I have a problem with corn chowder. I love it when I get it at restaurants. But, I haven't found a recipe I like to make at home. This, no doubt, has everything to do with my hesitancy to use ingredients like cream, or bacon. I finally decided that it must be these items that make the difference, though, and started rationalizing about how, it's bound to be moderately healthier made at home, even with those ingredients, and it would certainly be cheaper, per-serving. So, I found this recipe and we went for it. According to the link, it is originally from The Barefoot Contessa Cookbook, which, thanks to this recipe, is now very high on my "Cookbooks to Buy" list.

We made a few changes. We used turkey bacon rather than "real" bacon. We didn't have turmeric in the house, so we skipped it. We did have heavy cream in the house for some reason, so we used that instead of the half-and-half. And we halved the recipe because I saw no need for 10 to 12 servings of something with such a dubious nutritional profile for just two people.

The results were incredible. Really, this recipe finally matches up to what I can get at the restaurants.

Unfortunately, while the soup was simmering for its 15 minutes uncovered, my computer met with catastrophe. I don't know what I did wrong, but all of a sudden, there were pop-ups everywhere telling me about how my computer was under attack. Except, those pop-ups weren't from my antivirus software. They were from, well, a virus. This virus--spyware--whatever you want to call it--made my computer completely useless. And so began days of alternately wanting to cry, throw my laptop against a wall, and get revenge on whoever had done this to my precious laptop. On top of all this, I feared the worst--What would happen if I went into labor while my laptop was dead? GASP. As Kurt so appropriately asked, "If a baby is born, and The Jam Girls don't know about it, did it still happen?" I'm not sure, and I'm VERY glad not to have to find out.

So, in the end, the bear--also known as the virus--ate us, but we had some damn good corn chowder in the process.

Oh, and for those who would like to know, this program is what finally resuscitated my laptop this morning. I highly recommend it.
Posted by Allison at 12:54 PM 2 comments: Links to this post 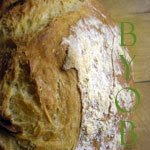